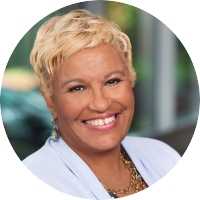 Dr. Yasmin Tyler-Hill was born and raised in South Carolina, but attended school at the HoltonArms School in Bethesda, Md. She remembers Holton as the place where she developed much of her philosophy about work ethic and life’s goals. To this day, she lives her life by the Holton’s motto: “Inveniam Viam Avet faciam” - “I shall find a way or make one.”

She graduated with a degree in biology with a letter in the science of human affairs from Princeton University. She received her medical degree from the Medical University of South Carolina and completed her internship and residency at Boston City Hospital, now Boston University Medical Center. In 2006, Dr. Tyler-Hill completed the Program for Physician Leaders at Academic Medical Centers sponsored by the School of Public Health at Harvard University.

In 2001, she joined the Morehouse School of Medicine (MSM) faculty as an assistant professor of clinical pediatrics, eventually becoming an associate professor in 2009. That same year, she developed the curriculum on Professionalism and Quality Improvement (2001). She also became the lead clinician for the department of pediatrics (DOP) (2003-present). Later, she reestablished the then-defunct Continuity Clinic (2004) and worked to improve and establish relationships with community partners such as West End Medical Center. Her vision was to provide more training for residents within a private pediatrician’s office, which proved to be successful and beneficial.

In addition to her MSM appointments, Dr. Tyler-Hill serves as the medical director for Children’s Healthcare of Atlanta (CHOA) at Hughes Spalding. She is the past-president of the medical staff, and serves on the Children’s Medical Executive Committee. She also serves on various boards such as the Georgia Chapter of the American Academy of Pediatrics, the Georgia Pediatric Health Improvement Collaborative (as an inaugural member), and the Medical Home Task Force in conjunction with CHOA.

Dr. Tyler-Hill has been married for 32 years to Mr. Everett L. Hill, and is the mother of two children: Tyler, 27 a law student at Yale, and Simone, 23, an editorial assistant at TheKnot.com. She resides in Sandy Springs, Ga. Her hobbies are reading, traveling and gardening.