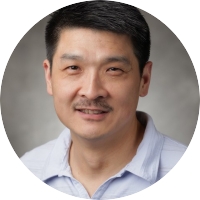 Dr. Li received his B.S. degree in Biochemistry in 1992 from Nanjing University in China. He did his Ph.D. thesis work in the laboratory of Clare Woodward in the Department of Biochemistry, Molecular Biology, and Biophysics at the University of Minnesota, Twin Cities, studying folding kinetics and dynamics of BPTI. With a Damon Runyon-Walter Winchell postdoctoral fellowship, he moved to the laboratory of William F. DeGrado at the University of Pennsylvania School of Medicine in 1999. There he collaborated closely with the laboratory of Joel S. Bennett, also at Penn, and studied ligand binding and transmembrane signaling of integrins, a major cell adhesion receptor. With a Howard Temin Award from NCI, he moved in 2003 to became an assistant professor in the Center for Membrane Biology, Department of Biochemistry and Molecular Biology at the University of Texas Health Science Center at Houston. He is currently a professor of pediatrics with tenure in the Aflac Cancer and Blood Disorders Center, Department of Pediatrics at Emory University School of Medicine. He is also a faculty member of the Graduate Division of Biological and Biomedical Sciences at Emory.

My overall research interest is the molecular mechanisms of blood diseases and the development of novel diagnostics and therapeutics. Current focuses are the pathophysiology of platelets, blood vessels and plasma proteins in the context of immune and thrombotic diseases.