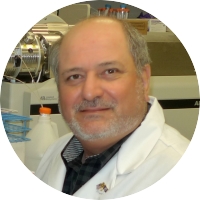 Dr. Raymond Schinazi is an explorer. His passion lies in discovering new lands, conquering new-found territories, and vanquishing foes. But for Dr. Schinazi, the lands aren't geographical; and the enemies aren't human. He explores viruses that attack the human body, and has discovered drugs that endeavor to disarm one of today's most dangerous enemies: HIV/AIDS.

Dr. Schinazi earned his Ph.D. in chemistry and D.Sc. in Biotechnology from Bath University, trained in pharmacology at Yale University, and started his career at Emory as a fellow of pediatrics infectious disease and immunology. He also trained in virology at Chicago University, and enzymology at the University of North Carolina, Chapel Hill. He began work as a herpes virologist, focusing on drug therapeutics for orolabial and genital herpes, and for treating severe life threatening infections such as herpes encephalitis. He also studied what causes latency and reactivation of the herpes virus. His work in this area inspired the research that is conducted in his lab today. In the 1980's, when scientists realized that HIV was a virus, Dr. Schinazi and his fellow researchers directed their time, energy, and resources towards the problem. Says Dr. Schinazi, "We couldn't just sit around and do nothing. We had the tools, we the brains, we had the information. We had learned a lot from the herpes virus, and all this needed to be translated to HIV."

Dr. Schinazi met the challenge head-on. He set up the first-ever HIV lab at Emory, as well as a protocol for how to deal with the dangerous virus in the lab. His lab has never had an accident, and the procedures he laid out for Emory have been replicated in thousands of labs around the world. Working through the university, he was able to gain access to resources that would have been unavailable to him as a researcher for a drug company. He was able to take the time to replicate others' failed work, to see what they had done wrong, and to correct the mistake. "Sometimes, to understand how to develop a drug, you had to take two steps backward to move three steps forward, and that's exactly what we did," he says. Over time, his patience and hard work paid off. The drugs invented in his lab are the most important HIV/AIDS drugs in use today, taken by the majority of individuals receiving treatment.

In the midst of these advances, Dr. Schinazi continues with new explorations. He wants to reach what he calls "the next level": a cure. By this he does not mean creating an HIV/AIDS vaccine, which would prevent individuals from contracting the virus. Past attempts to create such a vaccine have been unsuccessful, indicating that new approaches are needed. Consequently, his newest research builds on what he learned about latency and reactivation while working on herpes treatments. When a virus is latent, it lives in the body but does not affect it. At any given time, humans have 40-50 latent viruses within them, which may or may not undergo reactivation. Reactivation occurs when a stressor causes the body to transcribe its DNA into RNA. At this point, the virus becomes a health risk. Dr. Schinazi compares reactivation to the growing of a seed. A seed will not germinate unless it comes in contact with soil and water. Similarly, a virus becomes harmful only when it is triggered by stressors and transcribed from DNA to RNA. Dr. Schinazi's mission is to prevent this from happening, by clearing the body of the latent HIV/AIDS before it undergoes reactivation. He is investigating potential use of drugs and chemotherapy to keep the virus dormant, and developing therapeutics that target the whole body and wipe out the virus before it can do lasting harm.

Contributing to the greater good is the driving force behind Dr. Schinazi's life work. The drugs he is discovering can - and already do - mean the difference between life and death, suffering and good health, for millions of people. He is willing to take chances and leaps of faith in order to help find the cure for AIDS. Says Dr. Schinazi, "The key is not to be afraid to fail." He sees Emory as a global leader in transforming technologies associated with drug discovery and treatments for viral infections caused by HIV and hepatitis. The environment is now ripe for taking greater risks.

Dr. Schinazi credits Emory, and in particular the Atlanta VA Medical Center, for providing the resources and excellent laboratory facilities he needed for his past discoveries. Today, new modern biological tools that were not available a decade ago can be applied to overcome challenges that continue to arise. "With the right modern tools, experience and know-how," says Dr. Schinazi, "that task is made simpler." With continued support from his two NIH Merit Awards and one RO1 grant, a senior research career award from the VA Medical Center, profits produced by the sale of the drugs he created, and decades of research experience, Dr. Schinazi sets on his latest venture-the quest for the cure-well-armed. He intends to slay the dragon.

The major research emphasis of the Laboratory of Biochemical Pharmacology is in two medically important areas. First, the group focuses on the development of antiviral agents for the treatment of infections caused by human immunodeficiency viruses, and hepatitis viruses.

Work involves molecular modeling, synthetic, biochemical, pharmacological, and molecular approaches, including gene therapy and site directed mutagenesis. The main objective is to develop compounds for the prevention and treatment of these important diseases. Areas of particular interest include the characterization of drug-resistant virus variants and ways to overcome resistant viruses using combinations of drugs. Four compounds developed by this group have gone on to advanced clinical studies, and three have already been approved by the FDA for the treatment of HIV-1 infections.

The multidisciplinary antiviral research is aimed at discovering agents that could be used for the treatment HIV infections, and modalities aimed at preventing the development of drug-resistant viruses. Current research is in the fields of HIV, SIV, HBV, HCV, herpesviruses, and cryptosporidium. The ongoing work is primarily funded from a VA Merit Award; the NIH sponsored Emory University Center for AIDS Research (CFAR), several NIH grants.