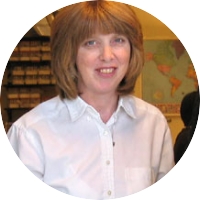 EMAIL: .(JavaScript must be enabled to view this email address)
Visit Website

Dr. Griendling's laboratory focuses on the role of reactive oxygen species in smooth muscle growth and the role of oxidative stress in the pathogenesis of vascular disease. Her laboratory identified and cloned several membrane-associated NAD(P)H oxidases that are the major source of reactive oxygen species in the vasculature. Importantly, these enzymes are responsive to angiotensin II, and appear to be involved in angiotensin II-induced vascular smooth muscle cell hypertrophy in vitro and in the genesis of vascular pathologies with altered growth states, including hypertension, atherosclerosis, diabetes and restenosis. Three major areas of research are ongoing in the laboratory. First, the structure-function relationships of the novel NAD(P)H oxidases are being investigated. These studies involve cloning new nox enzymes and their interacting partners and investigating the interaction of these proteins in vitro and in model cell systems. Second, Dr. Griendling's group studies the redox-sensitive signal transduction pathways by which reactive oxygen species derived from these NAD(P)H oxidases mediate vascular smooth muscle growth, migration and differentiation. Previous work from this laboratory has shown that angiotensin II activates Src, the EGF receptor, p38MAPK and Akt in a reactive oxygen species-dependent manner. More recently, they have shown that phosphoinositide-dependent kinase-1 (PDK-1), proteins involved in the translation initiation machinery, and cell cycle proteins are also regulated by reactive oxygen species. PDK-1 is of particular interest, because it is involved in the trans-inhibition of IRS-1 by angiotensin II, providing a potential molecular basis for the role of angiotensin II in insulin resistance. This is an ongoing project in Dr. Griendling's laboratory. The third major research area in Dr. Griendling's laboratory involves the generation of transgenic and knockout animals to investigate the role of the novel NAD(P)H oxidases in vascular disease. Mice overexpressing nox1 or p22phox and mice deficient in nox1, nox4 and p47phox are being studied with respect to vascular dysfunction in hypertension, atherosclerosis, balloon injury and diabetic models. In addition, p22phox overexpressing mice are being crossed with db/db mice to determine the role of reactive oxygen species in the vasculopathy that accompanies insulin resistance.