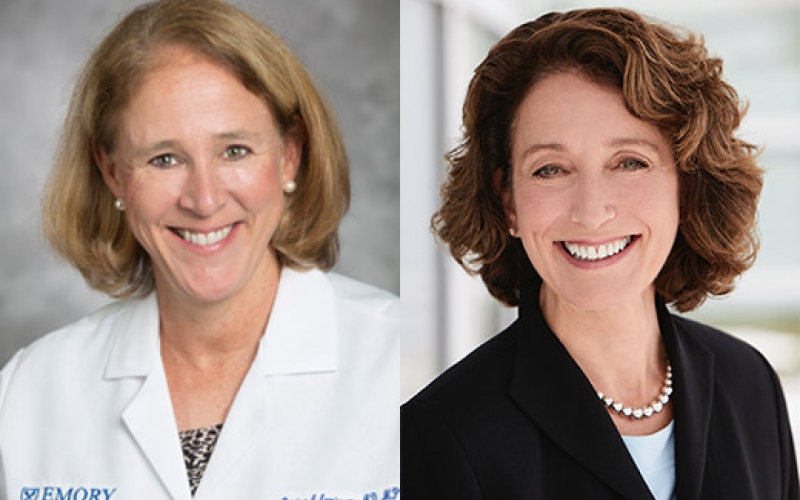 ATLANTA – The National Academy of Medicine (NAM) has elected Denise J. Jamieson, MD, MPH, and Susan Margulies, PhD, to its prestigious 2020 class, consisting of 100 new members. Election to NAM is considered one of the highest honors in the fields of health and medicine and recognizes individuals who have demonstrated outstanding professional achievement and commitment to service.

Jamieson is the James Robert McCord Professor and Chair in the Department of Gynecology and Obstetrics, Emory University School of Medicine, and chief of gynecology and obstetrics for Emory Healthcare. Jamieson’s research interests focus on emerging infectious diseases in pregnancy, beginning with HIV and then broadening to include other emerging infections including H1N1 influenza, Ebola virus disease, Zika and now COVID-19.

Margulies is the Wallace H. Coulter Professor and Chair in the Department of Biomedical Engineering (BME) at Emory University and Georgia Institute of Technology (Georgia Tech), a shared department between the two schools. She is also a Georgia Research Alliance Eminent Scholar in Injury Biomechanics. Her research interests center around traumatic brain injury in children and ventilator-induced lung injury with a focus in these areas on prevention, intervention and treatments.

New NAM members are elected by current members through a process that recognizes individuals who have made major contributions to the advancement of the medical sciences, health care and public health.

Jamieson and Margulies are paving the way for women in the fields of science and medicine. They represent two of three female chairs in Emory University School of Medicine out of 28 chairs within the school.

“We are excited to have two stellar faculty members join the ranks of the National Academy of Medicine this year,” says Jonathan S. Lewin, MD, executive vice president for health affairs at Emory University and CEO of Emory Healthcare. “Both Susan and Denise have contributed immensely to their fields of research and are exceptional leaders here at Emory and nationally in their specialty areas. We congratulate them on this newest achievement.”

Denise Jamieson joined the Emory faculty in 2017 following a 20-year career at the Centers for Disease Control and Prevention (CDC). There, she served in a variety of leadership positions, including medical care task force lead for the Ebola virus disease response in 2014 and incident commander for CDC’s response to Zika from 2016 to 2017. She also served as an Epidemic Intelligence Service (EIS) Officer. Upon retirement from the U.S. Public Health Service as a captain in July 2017, she received the Distinguished Service Medal, the highest award granted to an officer in the Commissioned Corps, for notable contributions to reproductive health and public health practice.

Today, she leads Emory’s Department of Gynecology and Obstetrics, where clinical service, teaching and research are provided through nine divisions comprised of 96 faculty and accompanied by residents, fellows and staff located at diverse hospital sites and clinics.

Jamieson earned a medical degree from Duke University School of Medicine and a master’s degree in public health from the University of North Carolina at Chapel Hill. She completed a residency in obstetrics and gynecology at University of California at San Francisco.

Susan Margulies came to Emory and Georgia Tech in 2017 from the University of Pennsylvania. She now leads a BME department that is consistently ranked as one of the nation's most prominent programs of its kind in both graduate and undergraduate education. For 2021, U.S. News & World Report ranks the joint Emory/Georgia Tech biomedical engineering program #2 in the U.S. for both graduates and undergraduates. It is the largest BME department in the country, with 68 faculty at Emory and Georgia Tech and more than 1,500 undergraduate and graduate students.

Margulies earned her BSE in mechanical and aerospace engineering at Princeton University and a PhD in bioengineering from the University of Pennsylvania. She completed a postdoctoral fellowship at Mayo Medical School.

Earlier this year in February, Margulies was also elected to the National Academy of Engineering (NAE), which is among the highest professional distinctions conferred to an engineer.

Established originally as the Institute of Medicine in 1970 by the National Academy of Sciences, the National Academy of Medicine addresses critical issues in health, science, medicine and related policy and inspires positive actions across sectors. The 2020 newly elected members bring NAM’s total membership to more than 2,200 and the number of international members to approximately 175.