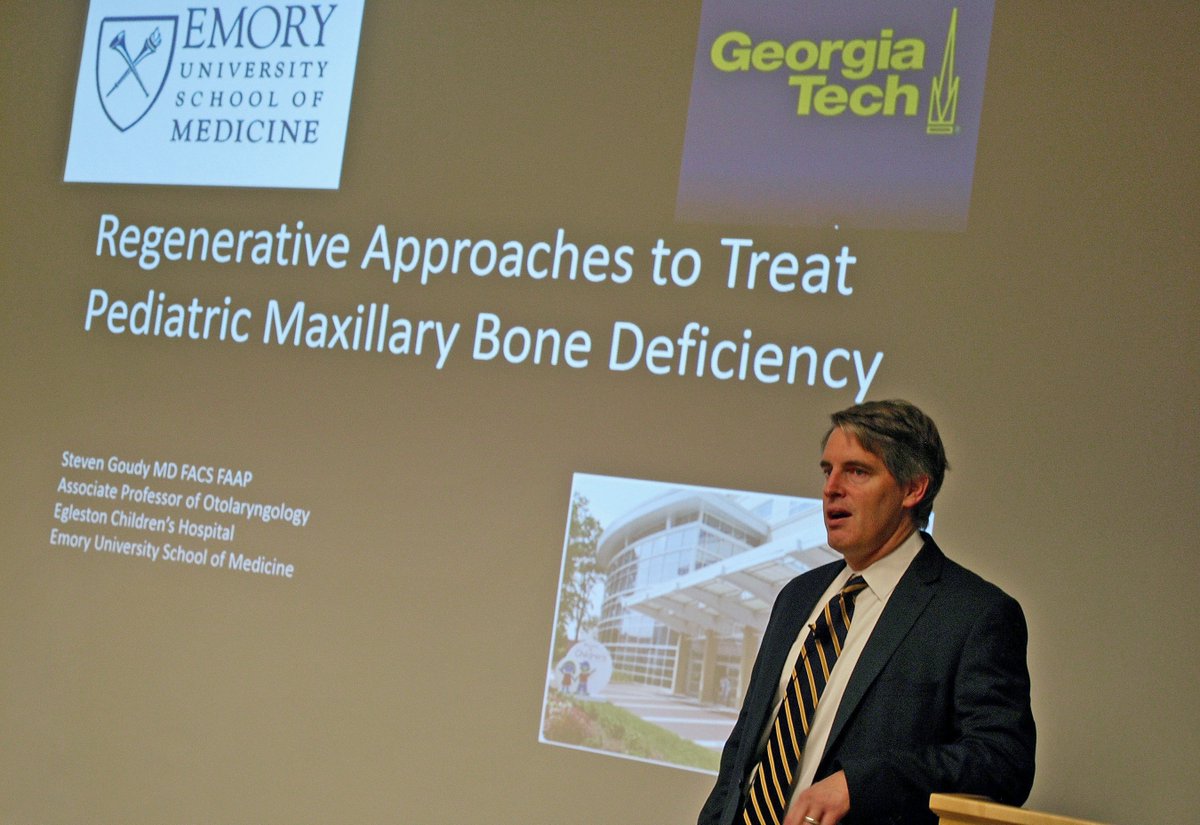 Dr. Goudy presenting at a conference 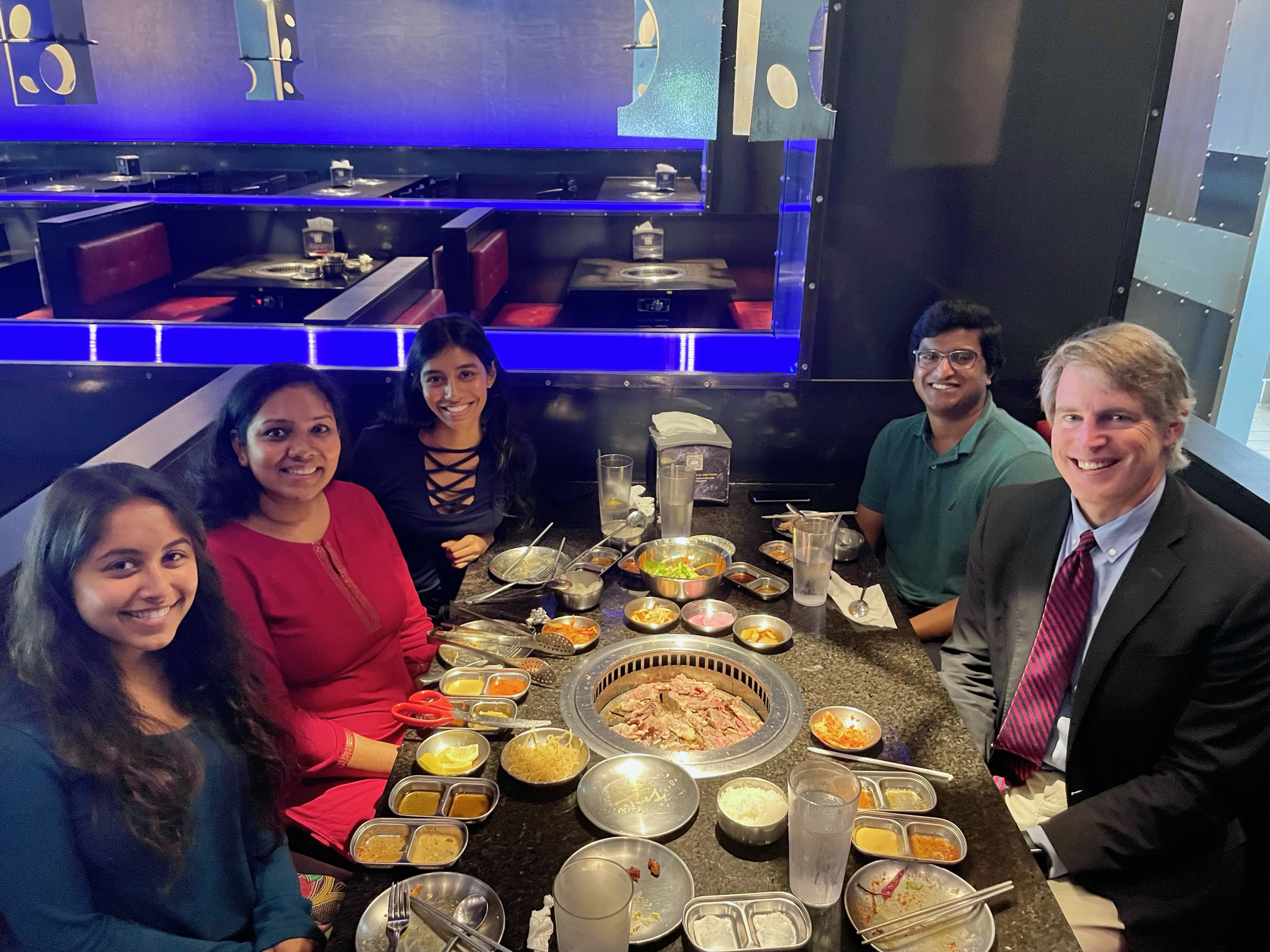 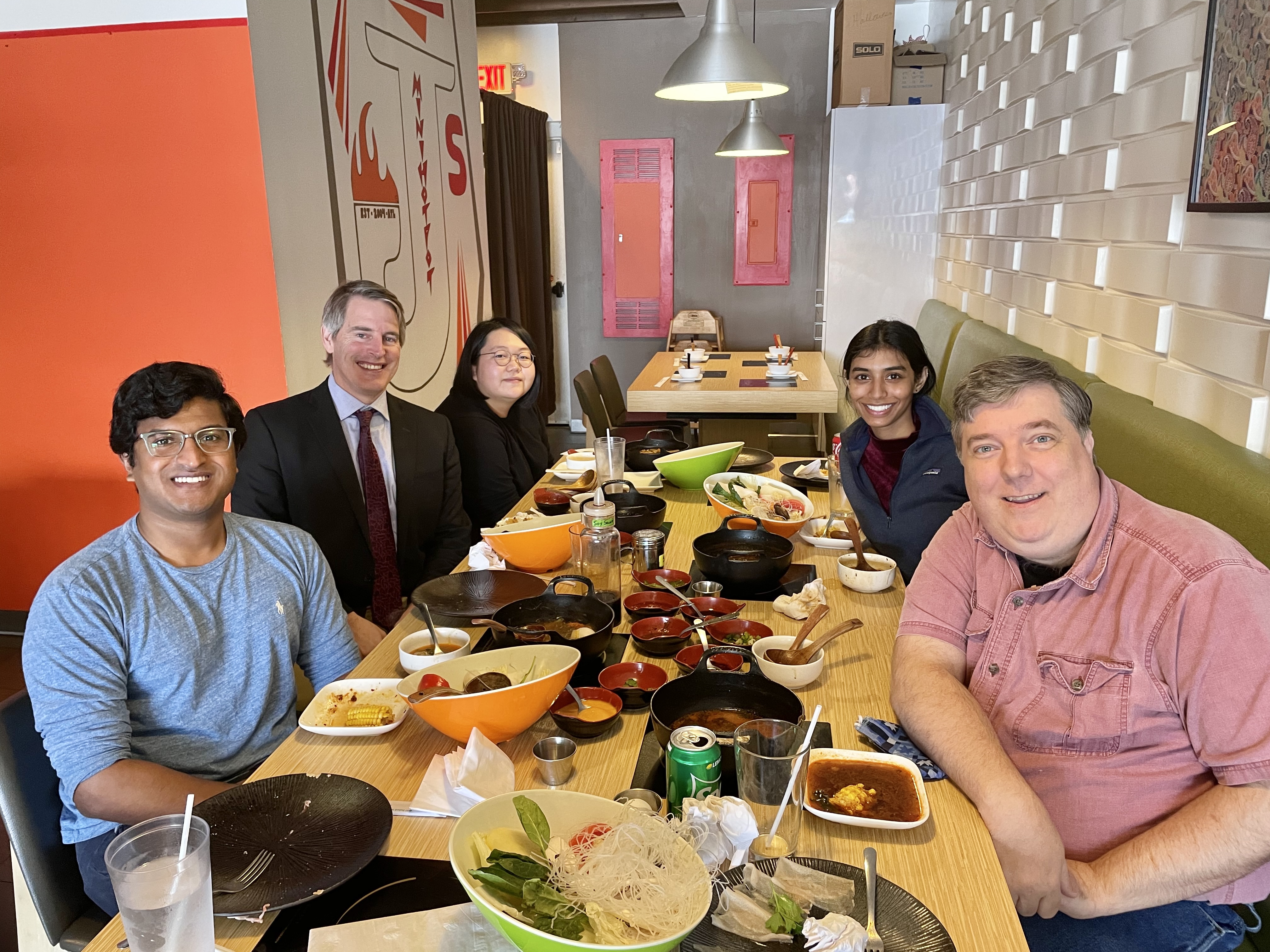 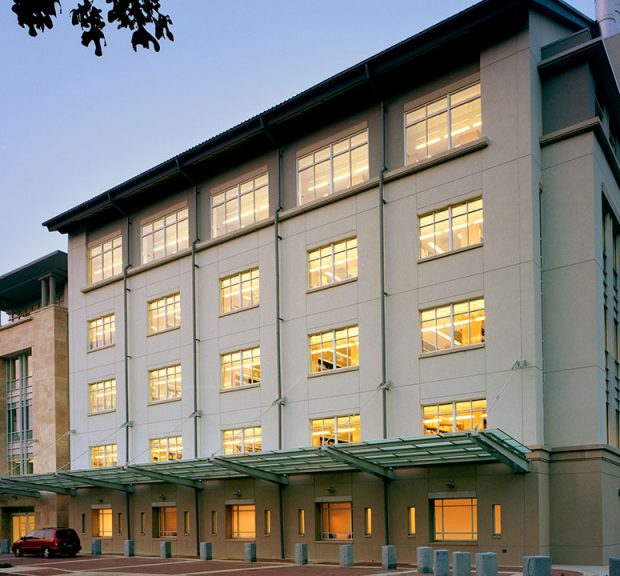 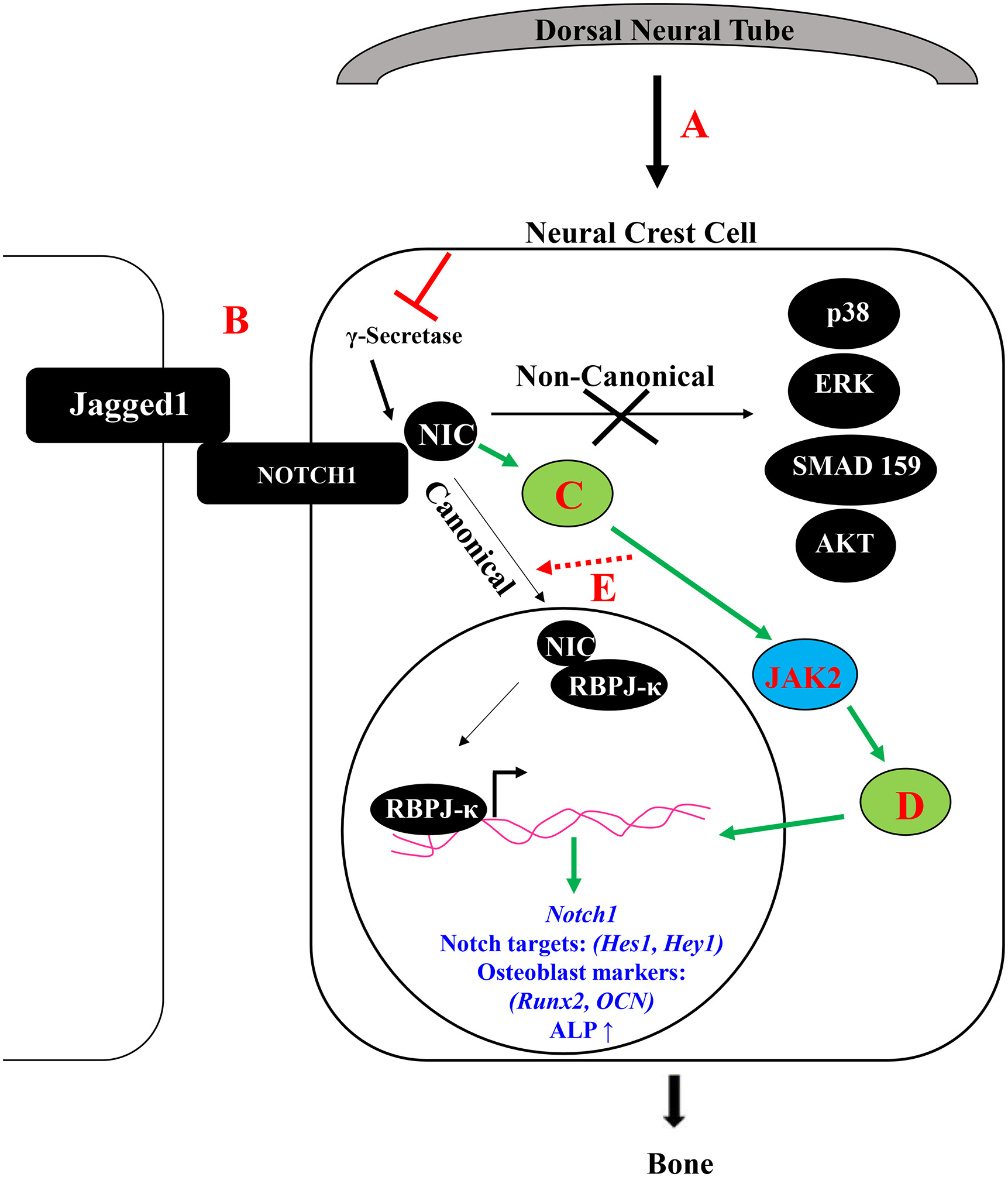 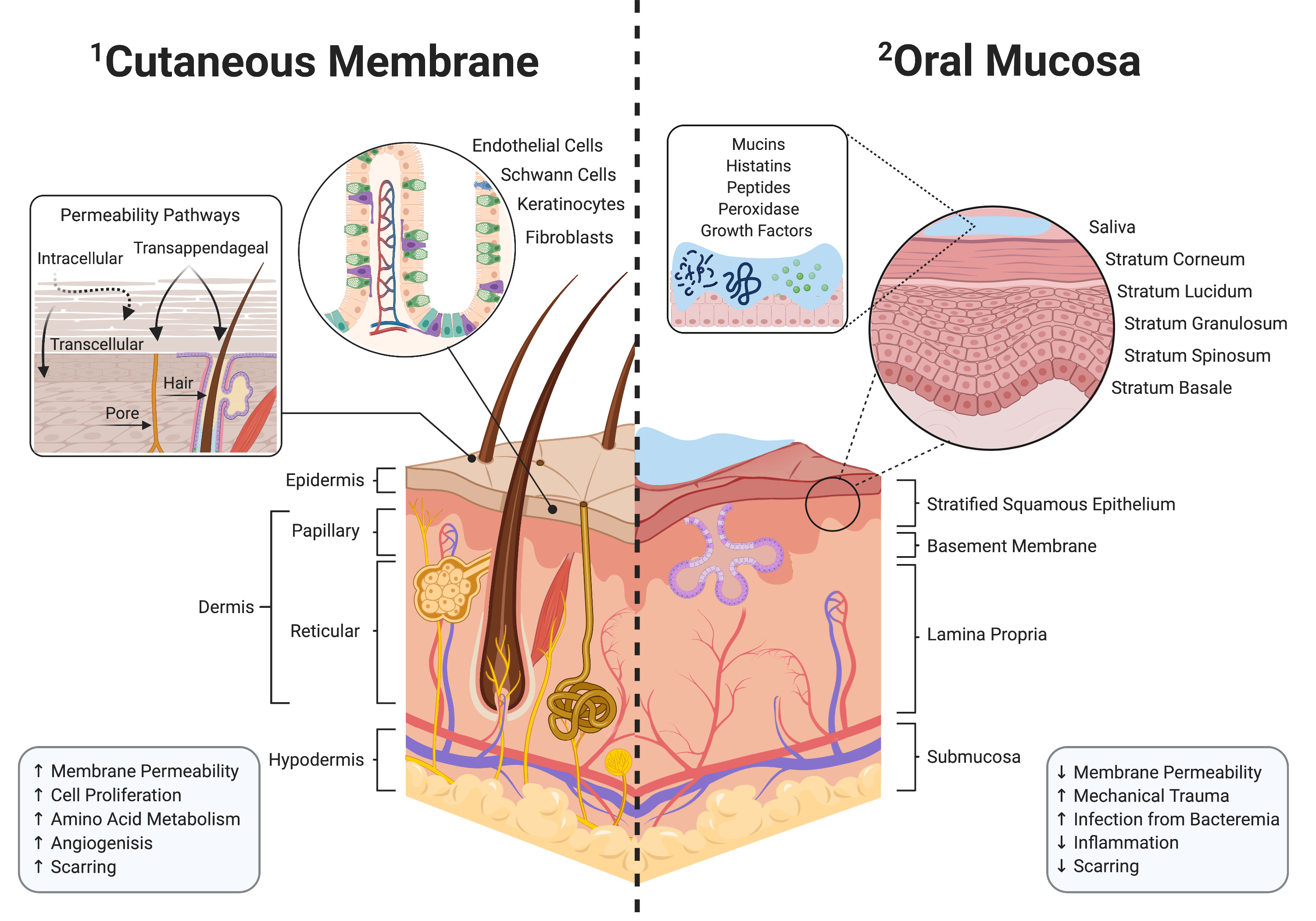 The Goudy Lab is focused on understanding the basic biologic mechanisms that control facial bone and soft tissue regeneration. Dr. Goudy’s clinical job involves repair of craniofacial malformations including cleft lip, cleft palate and Pierre Robin sequence, and he also participates in head and neck tumor resection and reconstruction.  In both scenarios, children need cutting edge therapies to improve wound healing, reduce operative complications, and develop novel therapies to restore function and reduce morbidity.  Our lab is focused on modeling bone and soft tissue loss in the craniofacial skeleton and we have developed models that allow us to study this in depth.  Using these models, the Goudy lab collaborates with multiple labs at both Emory and Georgia Tech to further develop regenerative approaches to craniofacial bone formation and soft tissue repair following injury.  Specifically, these regenerative therapies include: delivery of Jagged1 in PEG-MAL hydrogels to repair bone; delivery of FTY720-loaded biomaterial scaffolds to repair oral cavity mucosa; delivery of commensal bacteria using hydrogels to enhance oral wound healing. Our goal is to push the boundaries of what is currently known about facial bone and tissue repair, and ultimately use models to provide translational, clinical relevance, all while having fun!

Steven Goudy, M.D., MBA is the Director of Pediatric Otolaryngology at Emory University, where he is focused on craniofacial bone development and regeneration.  His lab is currently developing regenerative approaches to pediatric craniofacial bone loss using animal models.  Using in vitro and in vivo approaches, Dr. Goudy is developing innovative approaches for drug and cell delivery, leveraging their collaborations with the Georgia Institute of Technology.  Aside from spending time in lab and clinic, he is an active runner and was one of the Olympics torch-bearers at the 1996 Centennial Olympic Games.

Archana Kamalakar, Ph.D. is a post-doctoral fellow in our lab. She hails from India where she completed her Masters in Microbiology and a P.G. Diploma in Clinical Research. Archana discovered her propensity for Science at a very early age and she presented herself as a scientist at her 6th grade career exhibition. Thereafter, she completed her doctoral thesis project titled "Novel Regulators of Osteoclastogenesis: Interleukin-8 (IL-8) and Parathyroid hormone-related protein (12-48), (PTHrP(12-48))” at the University of Arkansas for Medical Sciences. Archana aspires to continue academic research and teaching in order to inculcate the love for Sciences in generations to come. Apart from Science, Archana also has a passion for Sailing. In 2006, she won the gold at the National Sailing Regatta (India) held by the Laser Class Association of India (LCAI).

Afra Toma, M.S. is currently a Ph.D. student in the Joint Biomedical Engineering at the Georgia Institute of Technology and Emory University. She graduated with her BS and MS degrees in Biomedical Engineering from Florida International University and University of Florida, respectively. As Toma is co-advised by Dr. Steven Goudy and Dr. Nick Willett, her project focuses on developing biomaterials-based immuno-regenerative therapies for orofacial clefts in pediatric patients and enhancing oral wound healing via local delivery of immunomodulatory drug. As she progresses through her PhD, Toma aspires to master trades that will allow her to empower the scientific community as a researcher, leader, and role model. Apart from spending time in lab, Toma enjoys photography, cooking, and painting.

Nithin Ravikumar, B.S. is an M.S. student in Biomedical Engineering at Georgia Tech with a B.S. in Chemical and Biomolecular Engineering also from the school. In the Goudy Lab, he is currently developing a PEG hydrogel-based strategy for the delivery of Jagged1 to improve bone regeneration of craniofacial injuries. Nithin hopes to strengthen his skills as a researcher and engineer to contribute to the scientific community and play role in improving human health. His other interests outside of science include reading and traveling.

Heath Bradley, M.S. earned a B.S. in Molecular Biology from Grove City College in 1997 and earned a M.S. in Biotechnology from Johns Hopkins University in 2006. Heath has over 20 years of experience in both research and clinical labs. In the fall of 2021 Heath joined the Goudy lab at Emory as to study the role that the oral and nasal microbiomes play on wound healing of orofacial clefts.  Heath hopes to further the lab's study of wound healing to help those in need find the help to have a better life. Outside of work, Heath enjoys outings with friends and family to see the Atlanta United and enjoys camping and other outdoor activities with his family.

Monica Behara, B.S. is currently an M.S. student in Biomedical Engineering at Georgia Tech. She graduated in 2021, with a B.S. in Biomedical Engineering and a minor in Materials Science Engineering from Georgia Institute of Technology. She is very passionate about the field of immunomodulation and is hoping to expand her knowledge of wound healing in the context of biomaterials implantation. In the future, Monica aspires to work with nanoscale biomaterials, and hopes to eventually apply this technology to immuno-regenerative therapies. In her free time, Monica is a classically trained violinist and pianist, is a member of several orchestras on/off campus, and enjoys singing in a variety of languages.

Angelica Amanso, Ph.D., is an academic research assistant scientist. She is from Brazil and obtained her degree in Pharmacy-Biochemistry at Sao Paulo University. Deep understanding of human biology was one of her major interests, so she pursued career as a scientist at the Heart Institute-Sao Paulo University, where she completed her Ph.D. in Cardiovascular basic science. Since 2009, she has been working at Emory University, developing projects and collaborating with several labs. In her spare time, she enjoys nature trails with her four-paw kids.

Samir Ballestas Naissir, M.D., is a medical doctor coming from Universidad del Norte at Barranquilla, Colombia. He discovered his passion for medicine, at a very young age and pursued medical training, specifically in Otolaryngology.  Interested in basic science research, he is very enthusiastic about surgical approaches like, voice surgery, endoscopic cranial base tumor resections and cleft palate charity surgeries for underserved communities. One of the purposes of the work he is doing here can also have an impact in vulnerable populations in his country and Latin America. Soccer and reading are among his interests outside medicine and science.

Craniofacial bone loss in children is a challenging clinical problem for which no regenerativestrategies are available. This type of bone loss is primarily treated with autologous bone grafting. Congenital absence of bone in the maxillary area is a defining facial characteristic of Alagille syndrome patients and may require bone grafting to restore maxillary alignment. Alagille syndrome is an autosomal dominantly inherited disorder that occurs primarily due to mutations in JAGGED1 and is associated with cardiac, biliary and bone phenotypes. Children with Alagille syndrome not only have maxillary bone hypoplasia, they also suffer from frequent bony fractures. Adults with Alagille syndrome have reduced bone mineral density and genome wide association studies revealed Single Nucleotide Polymorphisms in JAGGED1 were associated with reduced bone mineral density in otherwise unaffected adults. Together these data highlight the requirement of Jagged1 signaling during bone formation and that its absence causes multiple bony phenotypes, most noticeably maxillary hypoplasia. Jagged1 regulates multiple cell functions including cell survival, cell migration, and cell fate determination. Our initial work has established the requirement of Jagged1 during cranial neural crest (CNC) bone formation through the generation of a mouse model of Alagille syndrome with maxillary bone loss.

Orofacial clefts are the most prevalent congenital defect and require palate surgery to allow proper feeding and maxillary growth. Due to adverse healing, 60% of these surgeries fail, leading to oronasal fistula (ONF). The ONF affects the child’s ability to eat, talk, and thus, the overall quality of life. Current clinical care to repair ONF uses human donor tissue but carries risk of infection and allograft rejection. As the oral microbiome is bacteria laden, proper wound healing is difficult without immunomodulatory intervention. Along with our collaborators, Drs. Nick Willett, Edward Botchwey, and Dennis Liotta we recently showed that locally delivering immunomodulatory drugs using scaffolds can promote a pro-regenerative oral environment and reduce off-target side effects. We hypothesize that delivering FTY720-loaded polymer scaffolds will enhance oral wound healing and reduce the occurrence of ONF. Integrating principles from both cellular and tissue engineering, we aim to characterize the mechanism by which localized delivery of FTY720 promotes regenerative environment through recruitment of pro-regenerative immune cells. These findings are of extreme importance as harnessing the effects of immunomodulation for oral wound healing provides greater implication for more personalized and efficacious treatment options for pediatric patients.

Wound healing has been studied extensively on the skin and particularly following intestinal injury. Intestinal wound healing efficiency is highly sensitive to environmental factors, especially the microbiome, where specific microbial community structures or supplementation with probiotic bacteria enhances the wound healing process. However, little is known about how the oral microbiome affects ONF wound healing. We directly address this gap in knowledge and show preliminary data that creating an ONF in a murine model results in marked changes in the microbiome composition with the complete disappearance of certain microbes and blooms of other bacterial taxa.Thus, our overall hypothesis is that the oral commensal microbiome exerts positive modulatory influences on oral wound healing and may limit ONF formation. Discovering specific bacterial taxa within the oral cavity or wound tissue that positively influence healing will be essential information for the characterization of an eubiotic oral microbiome for wound healing. Our experiments will also generate critical information for clinicians about the prudent use of antibiotics after cleft palate surgery and the effects of depleting the oral microbiome during healing. We will also substantiate the approach of the repletion of the oral commensal bacteria using hydrogel technology as the vehicle to enhance oral wound healing. Together, these studies will yield critical data to inform new therapeutic modalities to lower the prevalence of ONFs following cleft palate surgery. 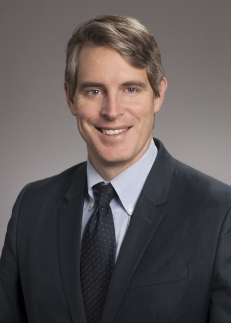 Dr. Goudy is the Principal Investigator and provides guidance to the research group 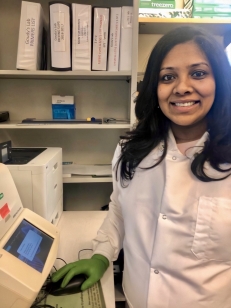 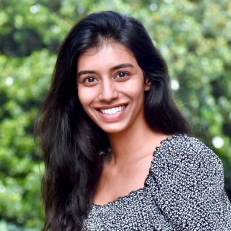 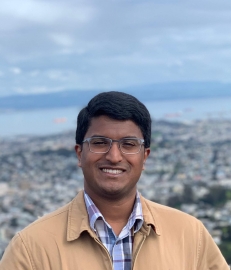 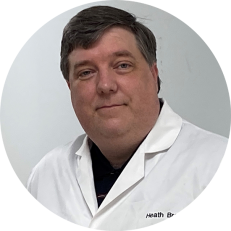 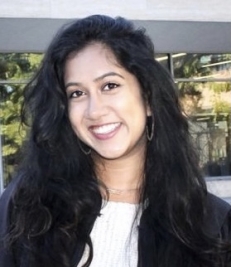