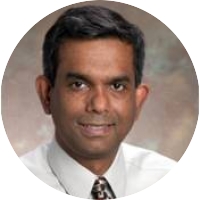 Dr. Kugathasan received his medical degree from Sri Lanka. After pediatric residency in Sinal Hospital of Baltimore, he completed his pediatric gastroenterology fellowship at Case Western Reserve University. His research training was in mucosal immunology at under the mentorship of Dr Fiocchi. In 2002, he received the Physician of the year award from Crohn’s and Colitis Foundation of America. He was the recipient of the prestigious young clinical investigator award from the society of North American Pediatric Gastrenterology & Nutrition (NASPGHAN) and junior physician investigator award from American Federation for Medical Research (AFMR). He has served as a co-chair for pediatric affairs of Crohn’s and Colitis foundation of America. He moved to Emory University in 2008, and has been appointed as a Marcus Professor of Pediatric Gastroenterology / Inflammatory bowel disease.

Dr Kugathasan’s research goal is to further extend novel genetic discoveries in inflammatory bowel disease (IBD), in particular common and rare susceptibility variants that are the cause of very early onset IBD. In addition, he has been investigating the immunogenetic mechanisms that underlie this chronic intestinal inflammation in children and adults with IBD. He is the principal investigator of a large 40 sites, multicenter research network where thousands of incident cases of early onset IBD are being enrolled. DNA, serum and intestinal biopsy materials are being banked to identify modifier genes, environmental and microbial factors that can be used to stratify the risk of complicated disease and surgery in IBD. As a clinician and an inflammatory bowel disease specialist, he also serves as scientific director of the inflammatory bowel disease program at Children’s Health Care of Atlanta and sees pediatric patients with inflammatory bowel disease, (both Crohn’s disease and ulcerative colitis) at Emory Children’s Center and Egleston Children’s hospital.