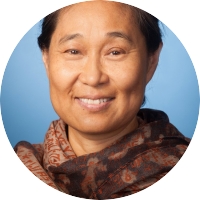 Chronic epilepsy often starts with an isolated, prolonged convulsion in early life followed by a period of remission; seizures then re-emerge and may become intractable. This period of remission following an initial seizure - a latent period - provides a window of opportunity for intervention prior to the onset of epilepsy and irreversible brain damage. There is currently no effective intervention for children with epilepsy after they have experienced seizure. The goal of the Koh laboratory is to minimize the detrimental effect of prolonged seizures in the immature brain (1) by understanding the innate ability of the young brain to heal itself, (2) by preventing the epileptogenic effect of seizures and (3) by improving cognition, learning and memory.

We have developed a "two-hit" rat seizure model demonstrating that an early life seizure, without causing overt cellular injury, increases susceptibility to seizures and to seizure-induced neuronal injury in adulthood. To elucidate the mechanism linking seizures in the developing brain to later epilepsy, we have used high-density oligonucleotide gene arrays and characterized the molecular cascades occurring after early life seizures that may underlie later increased seizure susceptibility. Our pilot gene array data have thus indicated that activation of resident microglia and subsequent increases in mRNA for cytokines and complements may be the key initiating events for seizure-induced inflammatory responses. The specifi focus of the research is to investigate the role of brain inflammation in childhood epilepsy and determine whether anti-inflammatory therapy can reverse the epileptogenic effect of early-life seizures.

Our laboratory has evaluated the efficacy of environmental enrichment in reversing seizure-induced changes in behavior, seizure susceptibility and gene expression in developing rats. Our results show that environmental enrichment can reverse the KA seizure-induced decrease in exploratory behavior and increase in seizure susceptibility in developing animals. These behavioral changes are accompanied by parallel changes in specific genes involved in learning, memory consolidation and cell proliferation, and in pro-inflammatory genes. Our results suggest that environmental enrichment may reverse seizure-induced neuronal injury and provide a potential alternative therapeutic strategy as well as an experimental basis for promoting enriching education programs for children with epilepsy.

We have shown that environmental enrichment increases expression of select target genes decreased by early-life seizures and improves animals' behavior. We plan to treat seizure-induced deficits in spatial memory and exploratory behavior by delivery of Arc, Homer1a and Erg1 individually and in combination to the hippocampus and show causative roles of these immediate early genes in the behavioral improvement. Transgenes will be delivered via adeno-associated virus (AAV) or lentiviral vector expression system. The effectiveness of gene therapy will be assessed by monitoring animals’ exploratory behavior in an open field and spatial memory in the Morris water maze. The effect of over-expression of transgenes on dendritic branching complexity and spine density will be quantified by unbiased steology on Golgi stained sections. Serial electron microscopy and three-dimensional reconstruction will be used to study the effect of transgene expression on dendritic synapse density and distribution.