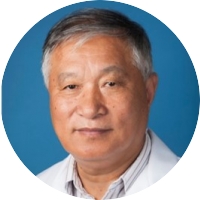 My research interests are in the field of signaling pathways and experimental therapeutics of childhood cancer. The current research activities of Zhou's lab are focused on the role of MDM2 oncoprotein in mediating cancer cell promotion and resistance to anticancer treatment, and exploration of targeting MDM2 for cancer therapeutics. Initially, we discovered that MDM2 is overexpressed in a significant number of pediatric leukemia patients. We later reported that overexpression of MDM2 in leukemic cells promote their growth and enhances resistance to chemotherapy. We then performed a series of studies to evaluate the signaling pathways and molecular mechanisms by which MDM2 regulates cancer cell survival and chemotherapy-resistance. We discovered that MDM2 plays a major role in inhibiting p53 tumor suppressor and abrogating p53-mediated repression of several survival or anti-apoptotic genes, including NF-kB, survivin, IKK?, and eIF4E, by reversing the p53-repressed promoter activities of these genes, which likely are involved in leukemia cell survival and chemo-resistance. We also found that MDM2 plays a p53-independent role in interacting with XIAP, which not only induces XIAP translation but also stabilizes MDM2 protein, resulting in enhanced leukemic cell growth and chemo-resistance. We are now performing studies seeking to target the MDM2-XIAP interaction using HTS to discover small molecule inhibitors for treatment of leukemia patients whose leukemic cells overexpress MDM2 and are chemo-resistant.