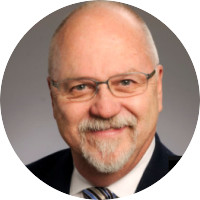 Dr. Joiner was recruited to Emory and CHOA in 2012 as Director of the Hematology Program in the Division of Hematology/Oncology, and as Professor of Pediatrics, he holds the Aflac Children’s Endowed Chair for Hematology. A native of Atlanta and alumnus of Druid Hills High School, he graduated from the Georgia Institute of Technology in Chemistry, and completed both MD and PhD degrees at Duke University in the Medical Scientist Training Program. After pediatric residency at Duke, he completed a clinical fellowship in Neonatology in the Joint Program in Neonatology at Harvard Medical School and a research fellowship in the Division of Hematology/ Oncology at Boston Children’s Hospital under Dr. Samuel E. Lux. He joined the faculty of Pediatrics at the University of Alabama at Birmingham and was promoted to Associate Professor (with tenure) before moving to the University of Cincinnati in 1989. At Cincinnati Children’s Hospital Medical Center, he was Director of the NIH-funded Cincinnati Comprehensive Sickle Cell Center from 1996 - 2012. From 2003 to 2008, he was vice-chair and then chair of the Clinical Trials Consortium of the Comprehensive Sickle Cell Centers, and organized the Ohio Sickle Cell Alliance for Research (composed of adult and pediatric programs at Cincinnati and Ohio State University) to participate in the Sickle Cell Disease Clinical Research Network (2008-2010). In 2010, he became Director of the Division of Hematology and Co-Director of the Cancer and Blood Diseases Institute. He served as Associate Director of the NIDDK-funded Cincinnati Center of Excellence in Molecular Hematology, until moving to Emory in 2012.

Dr. Joiner is currently MPI of the NIH-funded EHRA (U01 HL117721), and directs the Translational Research Skills Development Core of that grant, devoted to training junior faculty. With nearly continuous funding by multiple NIH grants since 1984, Dr. Joiner’s basic research has focused on red blood cell physiology, specifically cell volume regulation and its abnormalities in sickle cell disease. He has served on numerous NIH review panels, various program project reviews and the K23, K24 and K99 panels. He has served on numerous advisory committees to NIH, industry groups and the Sickle Cell Disease Association of America. He currently serves as the Training Director of the Atlanta Pediatric Scholars Program (K12HD072245) that provides support for pediatricians at the junior faculty level who aim to develop funded research programs in basic and translational science.  He has mentored numerous junior faculty, clinical and post-doctoral fellows, and medical students.