COVID-19 UPDATES: Find information and resources for faculty and staff regarding COVID-19 (2019 novel coronavirus)
In this section...
Research

​Emory University, Children’s Healthcare of Atlanta, and Georgia Tech – the key components of Atlanta’s comprehensive CF research program – have been awarded a grant from the Cystic Fibrosis Foundation (CFF) to establish the Atlanta CF Research and Development Program (CF@LANTA RDP Program). Nael McCarty, PhD, Marcus Professor of Cystic Fibrosis and Director of the CF Center of Excellence, is the Principal Investigator. The $1.8 million, four-year, renewable grant will enable the partner institutions and our investigators to expand our currently funded CF research programs and translate the results more effectively to patients. The RDP mechanism will enable us to leverage the investments already made by Emory and Children’s into a comprehensive CF research center.

To learn more about other aspects of CF and airways disease reseach, check out the CF-AIR center page. 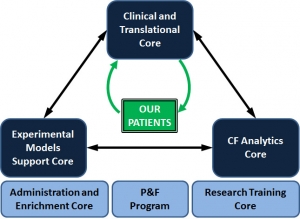 The CFF RDP grant mechanism was started in 1981, with the first award given to the University of Alabama at Birmingham. An RDP grant is a marker of excellence, as the strongest CF research programs in the country have received this support from the CFF. Being recognized by the CF Foundation as one of the 11 RDP centers nationwide reflects years of effort to improve the quality of our long-standing clinical program, the major advances we have made since 2007 in building a world-class research team and doing important science, and our establishment of innovative educational programs that will ensure that this progress continues. We are very grateful for the institutional support and the support from our local community that has enabled us to establish and improve our program.

The overarching goal of the CF@LANTA RDP Center at Emory University and Georgia Tech is to promote interdisciplinary research into the pathogenesis of CF and translate this new knowledge into therapeutic strategies for this life-shortening disease. The Center will continue to support all sorts of CF research, but the themes for the RDP proposal were CF-related diabetes (CFRD) and acute pulmonary exacerbations (APEs).

The manifestations of CF begin in infancy and the management of this disease becomes a life-long focus for patients and their families. Since the establishment of CF newborn screening, new patients are being identified at a very young age – young enough to greatly benefit from a new model of healthcare for CF that predicts disease progression, monitors for its symptoms, and approaches the disease and its physiologic consequences prospectively, rather than waiting for symptoms to arise.

Progressive lung disease is evident in two temporal phases: a slow decline in lung function in the sub-acute phase, punctuated by APEs in the acute phase. During an APE, the ecology of the lung is driven out of balance, most likely due to enhanced oxidative stress associated with an increase in bacterial burden and consequential increase in neutrophil invasion and activation, leading to progressive lung destruction. The frequency of APEs depends upon several factors including: age, CFTR genotype, socio-economic status, exposure to inciting agents such as respiratory viruses, cigarette smoke, and other environmental pollutants, and, most importantly, vigilance and aggressiveness of response on the part of the adult patient or the parent of a child with CF. The frequency of APEs is the most important determinant of mortality in CF. We hypothesize that the events leading to an APE have been underway for some time before symptoms appear; if we could predict an APE, the available therapies would be more efficacious. What the CF clinician needs is a way to recognize an oncoming APE before the symptoms appear. Therefore, our research in APEs aims:

CF-related diabetes (CFRD) is one of the most important co-morbidities in CF. CFRD appears in young children as impaired glucose tolerance, which is found in ~40% of CF toddlers. The prevalence of CFRD increases with age and reaches staggeringly high proportions with 20% of teens and 50% of adults having CFRD. The health issues related to CFRD are devastating, as CFRD is associated with a more rapid decline in lung function, worse nutrition, more frequent hospitalization, and increased mortality compared to CF individuals without CFRD. Although CFRD shares some features of both type 1 and type 2 diabetes, it is a distinct disease entity. Patients with CFRD have a significantly higher mortality than CF patients without diabetes. Death in CFRD is due to accelerated progression of lung disease and respiratory failure, not diabetes-induced vascular disease; however, the mechanism(s) whereby CFRD worsens CF lung disease remain unknown. Of equal concern is the extreme paucity of work that addresses the mechanisms involved in the development of CFRD, leaving the question of factors that promote insulin insufficiency and consequent CFRD largely unanswered. Therefore, our research focus in CFRD aims:

Three Scientific Cores are supported by the CF@LANTA RDP Center (see figure above): (1) Clinical and Translational Core; (2) Experimental Models Support Core; and (3) CF Analytics Core. Each of these Cores leverages capabilities established within CF-AIR, and also leverages existing strengths at Emory and Georgia Tech in systems biology approaches to complex diseases. The RDP Center also supports an Administrative and Enrichment program, a Pilot & Feasibility program, and a Research Training Core (for more detail on the educational components please see here).

The studies proposed and underway in our team extend from molecules to tissues to humans. Center investigators will use state-of-the-art approaches to study patients and patient-derived samples to identify the changes in airway function with respect to inflammation and redox imbalance that accompany development of CFRD and progression of disease via APEs, and will use experimental systems to test mechanistic hypotheses to integrate these results in the context of patient data on disease progression. This resultant new understanding will be translated back to the patient, taking advantage of the Clinical and Translational Core and the leaders of the clinical research team at Emory and Children’s.