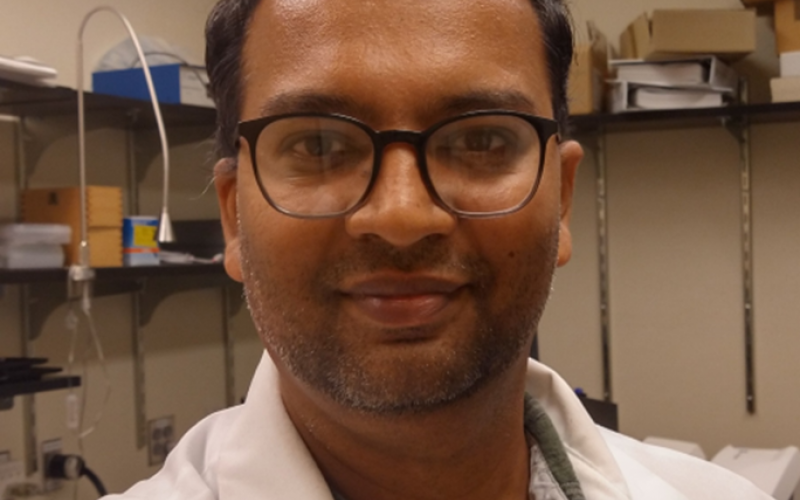 Manish Sharma, PhD, joined the Division of Infectious Diseases in the Department of Pediatrics at Emory University School of Medicine in 2021. Over the past year, Sharma’s research on the HIV-1 virus focused on cell entry sites, as well as novel labeling of HIV-1 viral particles and real time imaging.

Prior to joining Emory’s Pediatric ID Division, Sharma studied Japanese encephalitis virus (JEV) pathogenesis, specifically its effect on children as JEV has a 30-50% mortality rate. JEV motivated Sharma to learn more about neuroscience and neurotropic viruses, which took him to the Neuroscience Department at Scripps Research, Florida where he began studying Huntington Disease.

While at Scripps, Sharma was part of a team that first demonstrated the Rhes protein was responsible for tunneling nanotubes between two cells. These nanotubes subsequently transported the Huntington disease protein (mHTT) from one neuron to another.

Sharma and his colleagues at Scripps published their findings in the Journal of Cell Biology. They also proposed a potential mechanism for how Rhes-mediated neuron to neuron propagation of mHTT can cause further damage to different parts of the brain. The team’s further studies showed that mHTT spreading was further diminished in Rhes-deleted mouse brains, indicating that the Rhes protein is a physiological mediator of mHTT transport in vivo. This study was recently published in Science Advances.

Similar to this Rhes protein, HIV-1 also promotes tunneling nanotubes and transmits from one cell to another. This spreads the infection and depletes immune cells. However, the mechanism by which this occurs is not clear.

Emory’s strengths, especially in Pediatric Infectious Diseases and HIV-1 research, along with our cutting-edge resources and Sharma’s commitment to return to working on issues in child health, drew him here. Currently, Sharma has two projects: one on a novel approach to pinpointing HIV-1 fusion and one on cell-to-cell transmission of HIV-1 via tunneling nanotubes in macrophages and CD4+ T-cells.

HIV-1 fusion sites within cells remain controversial. There is evidence both for HIV-1 fusion directly with the cell plasma membrane and for productive entry through endocytosis. Sharma’s future plan is to combine single virus tracking with a novel triple-labeling strategy intended to pinpoint HIV-1 entry site(s) in cells.

Using this method, HIV-1 pseudoviruses will be co-labeled with (i) a lipophilic dye (DiD) that discriminates between virus fusion with the plasma membrane and endosomes, (ii) ecliptic pHluorin, an extraviral pH sensor that is quenched in mildly acidic environment, and (iii) HIV-1 Gag-imCherry that labels the viral core.

Through triple-labelling, Sharma plans to explore the HIV-1 transmission in host cells, especially in primary macrophages and T-cells for direct visualization of HIV-1 entry and fusion in the cells. §