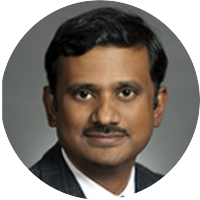 Dr. Krishnendu (Krish) Roy received his undergraduate degree from the Indian Institute of Technology (India) followed by his MS from Boston University and his PhD in Biomedical Engineering from Johns Hopkins University. Following his PhD, he joined Zycos Inc., a start-up biotechnology company where he served first as a Scientist and then as a Senior Scientist in the Drug Delivery Research group. Dr. Roy left his industrial position to join The University of Texas at Austin in 2002, where he was most recently Professor and Fellow of the Cockrell Chair in Engineering Excellence. He left UT-Austin in July of 2013 to move to Georgia Tech. where he is currently Professor and Wallace H. Coulter Distinguished Faculty Fellow. Dr. Roy’s research interests are in the areas of controlled drug and vaccine delivery technologies, Immuno-engineering and stem cell engineering with particular focus in biomedical materials with applications in cancer and immunotherapies. In recognition of his seminal contribution to these fields, Dr. Roy has been elected Fellow of the American Institute for Medical and Biological Engineering (AIMBE) and Fellow of the Biomedical Engineering Society (BMES). In addition, Dr. Roy has received numerous awards and honors including Young Investigator Awards from both the Controlled Release Society (CRS) and The Society for Biomaterials (SFB), the Young Scientist Award from HSEMB, NSF CAREER award, Global Indus Technovator Award from MIT, the CRS Cygnus Award etc. He has also received the translational research award from the Coulter foundation and the bioengineering grant from the Whitaker Foundation. Dr. Roy’s research has been supported through numerous grants from the NIH and NSF as well as the Cancer Prevention and Research Institute of Texas (CPRIT). He is also twice the recipient of Best Teacher Award given by the Biomedical Engineering Students at The University of Texas. He serves as a member of the Editorial Boards of the Journal of Controlled Release and the European Journal of Pharmaceutics and Biopharmaceutics.