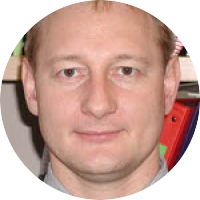 Dr. Shayakhmetov obtained his BS degree in biochemistry and PhD degree in molecular biology and virology under the supervision of one of the leading virologists in Russia, Professor Thomas Tikchonenko. He obtained his postdoctoral training in virology and immunology in the laboratory of Dr. Andre Lieber, in the Department of Medicine at the University of Washington, in Seattle, where he was appointed to faculty as an Assistant Professor (2005) and later promoted to an Associate Professor (2010). Dr. Shayakhmetov joined the Lowance Center for Human Immunology at Emory University in April of 2014.

The main focus of Dr. Shayakhmetov’s research program has been on improving our understanding of the role of innate immunity in initiating and exacerbating inflammation in response to viral (adenovirus) and bacterial pathogens, and tissue damage. The interplay between pro-inflammatory IL-1- and TNF-dependent signaling pathways in the context of infection and sterile tissue damage is the current focus of his research. Specifically, he is interested to understand the role of non-apoptotic pro-inflammatory cell death in triggering devastating local and systemic inflammation, associated with severe acute bacterial infections, sepsis, and several autoimmune and autoinflammatory disorders.

In 2008, Dr. Shayakhmetov was awarded the Outstanding New Investigator Award by the American Society of Gene and Cell Therapy for his contribution to deciphering molecular mechanisms triggering severe inflammation to adenovirus vectors in clinically-relevant settings.

Dr. Shayakhmetov is a member of several professional societies, including American Association of Immunologists, American Society for Microbiology, American Association for the Advancement of Science, and American Society of Gene and Cell Therapy. He serves as an Editorial Board member of Molecular Therapy, Cancer Gene Therapy, and Genes and Immunity journals, as well as participating as an ad hoc reviewer at the NIH study sections (VIR-A, GDD, and III) and many international grant review panels. Since 2012, Dr. Shayakhmetov has served as a regular member of the NIH Innate Immunity and Inflammation study section.

Over the years, Dr. Shayakhmetov’s research program has been supported by the grants from the National Institutes of Health and private foundations, including Cystic Fibrosis Foundation and the Bill and Melinda Gates Foundation.

The role of regulated pro-inflammatory cell death in host responses to pathogens and sterile tissue damage.