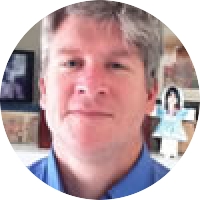 Dr. Searles received his B.A. from Princeton University and M.D. from Georgetown University.  He did his internal medicine residency and cardiology fellowship at Emory University School of Medicine. After fellowship, he joined Emory's Division of Cardiology faculty, where he is an Assistant Professor of Medicine. Since 2004, Dr. Searles has been Associate Director of the Emory Cardiology Fellowship Program. He also directs the Basic Science Investigator Pathway for the fellowship program.

His laboratory has been focused on molecular mechanisms by which different physiologic and pathophysiologic stimuli modulate vascular gene expression, with particular emphasis on posttranscriptional regulation of gene expression in endothelial cells. They have spent considerable time examining how gene expression in endothelial cells is influenced by shear stress, the mechanical forces associated with blood flow. In vivo, these forces play a critical role in the regulation of vascular tone, vascular remodeling, and the development of atherosclerotic lesions. His group was among the first to report that shear stress forces enhance the expression of a distinct group of microRNAs in endothelial cells, and they are performing studies to show that microRNAs are key regulators of anti- and pro-atherogenic phenotypes of endothelial cells. The recent recognition of extracellular microRNAs as potential cell-to-cell communication molecules and biomarkers for disease has led to a new and exciting direction of research in his lab, and his group is now devoting significant effort to studying the export and uptake of microRNAs by endothelial and other vascular cells. This work has involved studies of extracellular microRNAs in cultured cells and the blood of mice and humans. They are very excited that this work has led to new intra- and interinstitutional collaborations between his group and others.

His group has also been part of large, collaborative effort between Emory and Georgia Tech to develop nanotechnologies for the analysis and detection of atherosclerotic plaque formation. Currently, their work on this project focuses on the development of nucleic acid probes, known as molecular beacons, for the detection and quantification of microRNAs.

Dr. Searles is a staff Cardiologist at the Atlanta VA Medical center where he is Director of the CCU. He also attends in the cardiac catheterization and echocardiography laboratories, and he supervises fellows on cath and echo rotations.